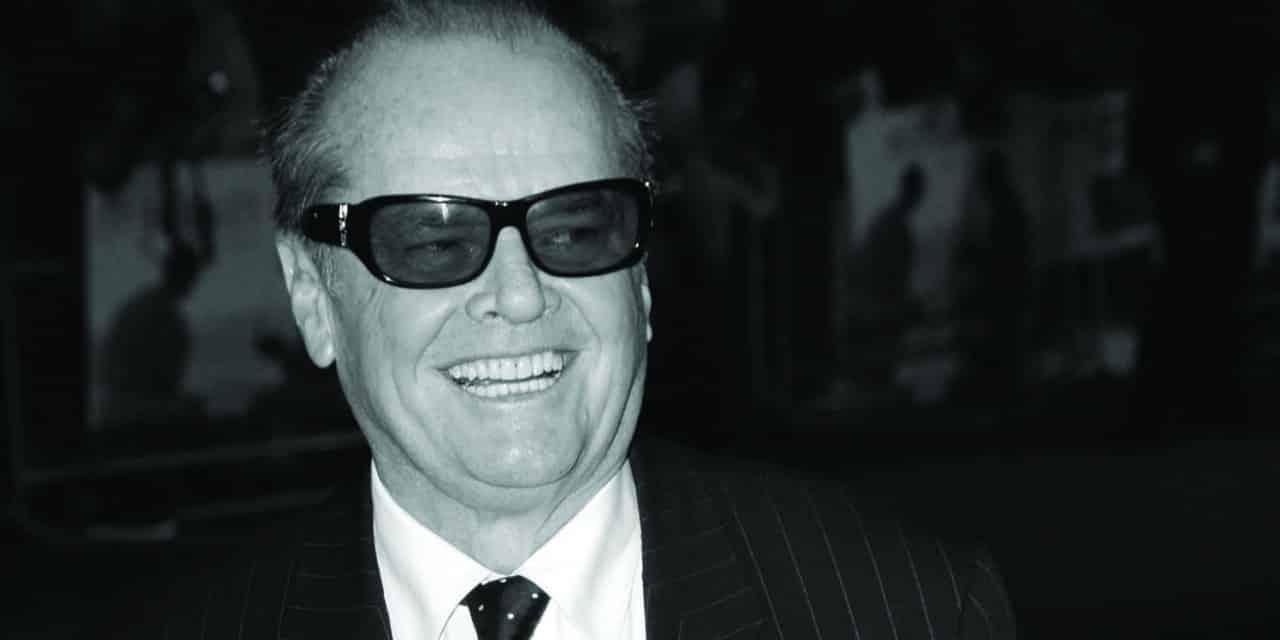 More than 50 years of work have gone into the mischievous smile that defines “King of Cool” Jack Nicholson. Born and raised in New Jersey, he was voted class clown at Manasquan High in1954. As a young man the west beckoned. After stints in Hollywood as a low-level gofer and a writer, the acting world discovered his worth in such classics as “Easy Rider,” “Five Easy Pieces,” and “Chinatown.” Jack Nicholson is one of only two actors to have been nominated for an Academy Award in five different decades. Although overlooked in this year’s awards for his role in Martin Scorsese’s “The Departed,” the classic Nicholson character gave audiences a lot to talk about. He still leads the pack with most overall Academy nominations for a male actor. At the age of 69, Jack Nicholson is now playing a mere mortal in director Rob Reiner’s new movie, “The Bucket List.” He and Morgan Freeman star as dying men who must complete their “to-do” lists before it is too late.

Meeting Jack Nicholson in person may leave you speechless. His presence alone has a tongue-freezing effect. Conducting the interview during his quick break from shooting was also a challenge, as I figured the guy had somewhere better or more important to be – like maybe a Lakers game. But when the conversation turned to art, it allowed Jack to become the fan and he had plenty to say. 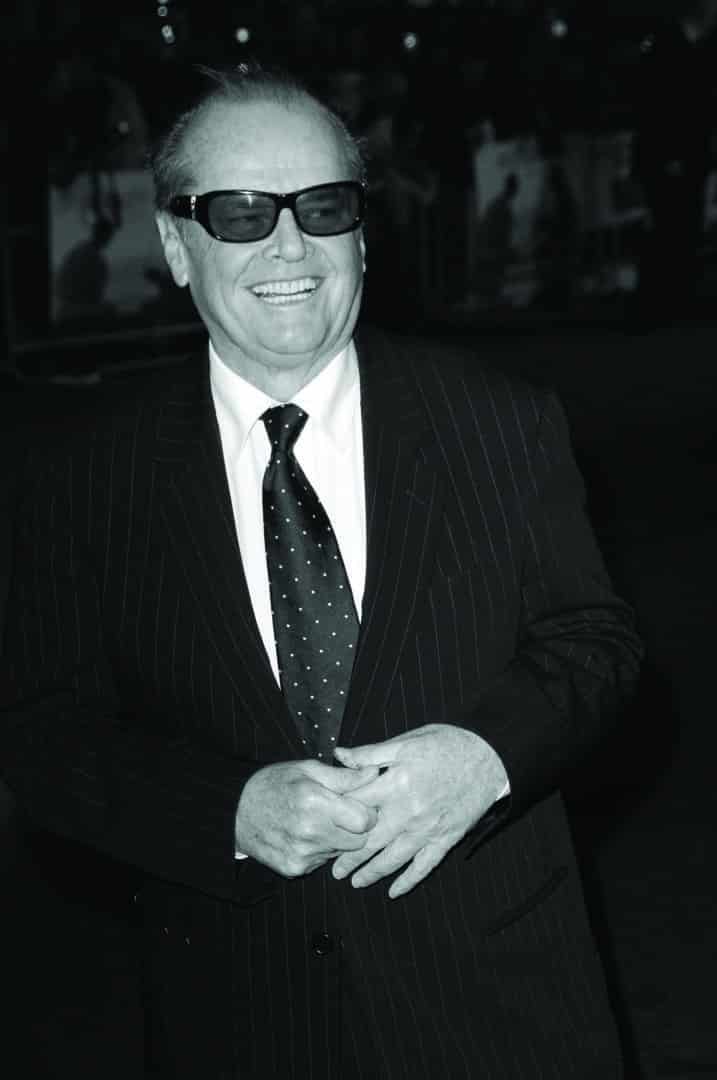 Dina: This month we are pleased to be featuring Ed Ruscha in ARTWORKS, and we hear you’re a Ruscha fan. How long have you collected Ruscha?

Jack: I knew about the work before I collected it. Quite a few of my friends knew about him and we all know each other. Everyone is in the Venice Beach area, so we’re all part of the L.A., southern California movement. You know, we’re all that age group. We’re all friends.

Dina: What drew you to Ruscha?

Jack: I wasn’t and hadn’t been a primarily contemporary collector. I had picked up a few things and I always liked Ed’s work. I have six, seven or eight things of his, like WOLF. He did Sin. Those are two of the things that show the main way he paints. I love his paintings of birds. I wouldn’t mind getting my hands on one of those. Michelle Phillips has a great piece of his; you look closely and it’s all made up of flies. IMAGINE THIS … it’s amazing. I think one of my friends has Chili, which is made up of beans.

Dina: How about asking him to do a bird painting for you?

Jack: Nah, you never impose on friends like that!

Dina: You’re willing to spend the “dough” on these works?

Jack: Yeah, well his paintings sell for around a million dollars. How great to be able to paint and print money, basically! But, there’s a reason for it. He’s a major painter.

Dina: What is Mr. Ruscha’s personality? Is he eccentric?

Jack: He’s very quiet. I wouldn’t say eccentric, but how can you not be if you are doing what he does? He is very gentle, very solid guy, a regular Midwest guy who goes about his business and always has. He is prolific. He loves what he does and does it great. He’s very social. He and his wife, Dana, I have known them both for a long time. They are great people.

Dina: How did you meet?

Jack: I can’t remember how we met. We have a lot of the same friends and probably met at a party. And I happened to be in Paris at his first big show. I knew of him. I remember a painting he did – a poster for his first Paris show… Ruby is what it was. I can see it clear as a bell in my head. That goes back to the early 70’s. Anyway, I had a great big painting of Joshua Tree. I love Ed’s work. I first went to an auction because Diana Vreeland had invited me to Sotheby’s in London. She said, “You have to see this man’s work” (referring to Ruscha). If you are an actor in L.A. or New York, you just end up getting to know each other.

Dina: How long have you been an art collector?

Jack: Always. But, I never thought I’d buy much. I just drifted into it. I have always liked pictures. My grandma Mudd was an amateur painter. I was always around it. I had quite a few pictures when I moved into my house in L.A., but they were stolen. I had John Altoon, James Strombotne, you know, some I bought for a nickel, some were given to me and I had a few. I never got into buying them until I went to that one auction. I don’t buy much anymore unless I can personally go to the auction.

Dina: If money were absolutely no object, what kind of pieces would you buy?

Jack: It would be hard for me. I have an eclectic collection. If money were no object, I’d have to go with Rembrandt, Velasquez. A great picture is a great picture… nothing’s clearer than that. I basically bought the pictures I have at auction. It’s kind of like basketball; it’s entertainment. When I come home it has a very real quality, very real. You can’t hang bad paintings in your house.

Dina: So, your taste is varied?

Jack: I like a lot of kinds of painters. You can’t name a painter that I don’t like. I also have a lot of sculpture.

Dina: I bet you and Morgan Freeman are having a lot of fun taking on such a deep issue in this new movie.

Jack: In that sense, yeah. This is a road picture – two guys out messing around. And yes, it gives us a little confrontation with the “big issue.”

Dina: Has it made you think about anything – appreciate things – a little more in life?

Jack: Well, you know, it’s a movie. But you put everything you got in there. It’s a tough subject, but we’re having fun.

Jack: Working with Morgan is great. He’s a real pro. He knows how to be photographed. When he puts a hat on, it looks right on him. We had a great day the other day. We are playing cranky old men. The other day I got to lay in a hospital bed all day, bandaged up; no one could recognize me. And I’ve worked with Rob Reiner before on “A Few Good Men,” so it’s going great.

Dina: At this stage in the game, if you could take on any role, what would it be?

Jack: Most roles I might have wanted to do, I am too old for. Napolean, he died at 50. I always liked Henderson the Rain King (from The Monkey Wrench by Edward Abbey). But now I am a little more mellow. Maybe I’d do it as a director. If I had it now I would be too old, plus I never thought of myself as right for the part.

Dina: What are some of the benefits of becoming one of Hollywood’s senior statesmen?

Jack: I don’t know if I get into the statesmen or sentimental category. Guys like Clint and me, we’re working. He loves it. I love it. We (Clint and I) had a talk one time which kind of ended up with, “Do I really want to do this?” In the end – and it’s hard for a full-grown man to say – but in the end, I like to make things. I like to make beautiful things.

Dina: What are you learning from your younger children? (Lorraine, 16 and Raymond, 14)

Jack: I just got back from my son Ray’s basketball game. What they teach me is how wrong I was as a kid. They are mellow, not wild about criticism. So I don’t give them much. Let’s face it – it’s all luck of the draw with kids. You can’t control too much. I feel very fortunate with Lorraine and Ray. Getting them late in life, it’s work you enjoy. It’s unconditional love.

Dina: Did you expose them to art when they were little?

Jack: I wanted to get them into painting and drawing, so I did a lot of that with ‘em, and I got back into painting. I don’t like to talk too much about that. I am perfectly happy with my current job.

Dina: You are pretty satisfied with what you are doing?

Jack: The only job better than mine is being an opera singer or a painter.

Jack’s new movie, “The Bucket List,” will be released sometime this year. You can always catch him
courtside at his beloved L.A. Lakers games.