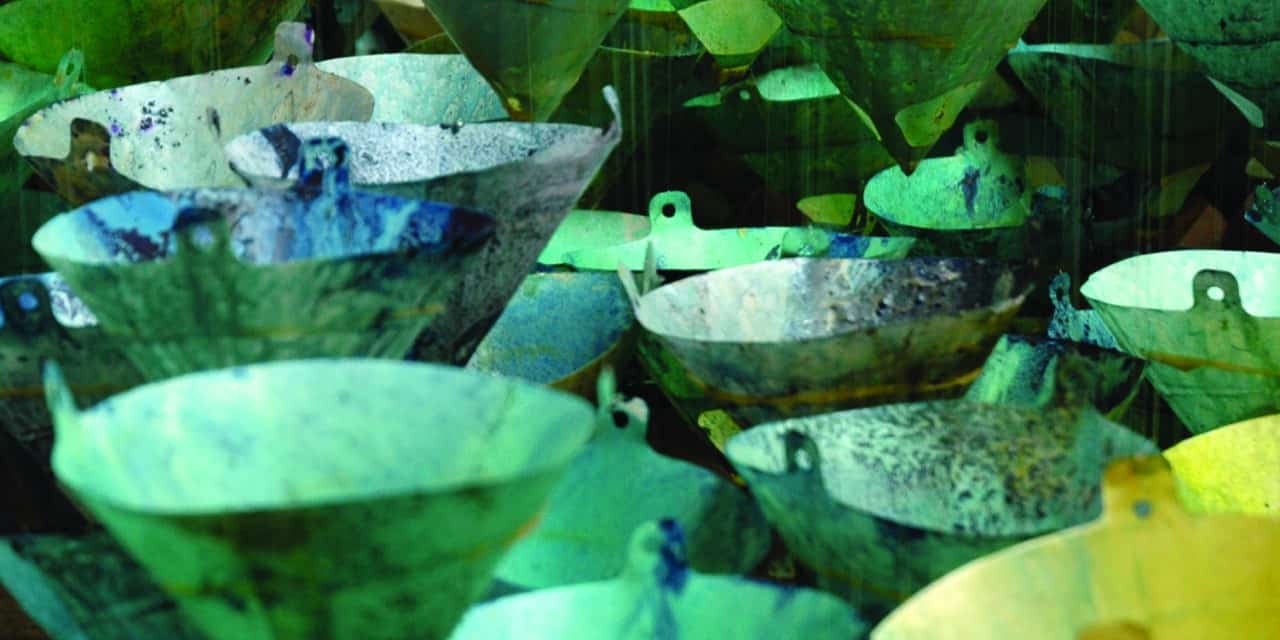 Greenland is melting, great chunks of Antarctica’s ice shelves are breaking off, two thirds of polar bears could be gone by 2050, the penguin population is dying out at an alarming rate, koala bears could be extinct in the next few decades, monster hurricanes and killer floods could become the norm, the coastal jellyfish invasion is intensifying and fine French wines are threatened. Honestly, the list could go on and on. All of it linked, at least in part, to global warming. The scope of the problem is overwhelming, and it would be easy to mentally shelve it, but that is exactly what installation artist Christel Dillbohner doesn’t want you to do. She is not asking for answers, not even action – yet, but rather just a few minutes of your time to think about the fate of planet Earth.

Dillbohner’s latest site-specific installation at The San Jose Institute of Contemporary Art invites quiet contemplation. Thousands of beeswax-dipped cones, in various complimentary color striations, are suspended just inches above the floor. The cones sway as they react, ever so slightly, to people moving around the “ice.” And as the room heats, the result of collective humanity, the piece “gives off a very slight sweet scent of wax and honey.” This is not hit-you-over-the-head art with a message, but it is an effective metaphor for global climate change. Sitting still in an empty gallery it is beautiful, fragile, and still – add people and it is altered. “I don’t want to scare anyone. Life is scary enough,” she says. “But we are all in this and we have to work together to create an understanding and make changes.”

The idea for the cone “pools” came to Christel in the unlikeliest of places. The genesis really came from the cone shape that she was using as a symbol for the human body.  “Some of them were made out of canvas and wax and they had the height of a human body or even bigger,” she says. “I was depicting the process of various intake – nourishment, knowledge, things like that. Funneling through.”  The concept took a turn after an innocent trip to the hardware store. She came across stacks of industrial paper paint filters. “I saw these cones and thought  ‘this is something I can work with. Maybe I can bring nature into the urban area and create some kind of environment where the viewer can have that experience of going to a pool and think.” So she started experimenting in her studio. 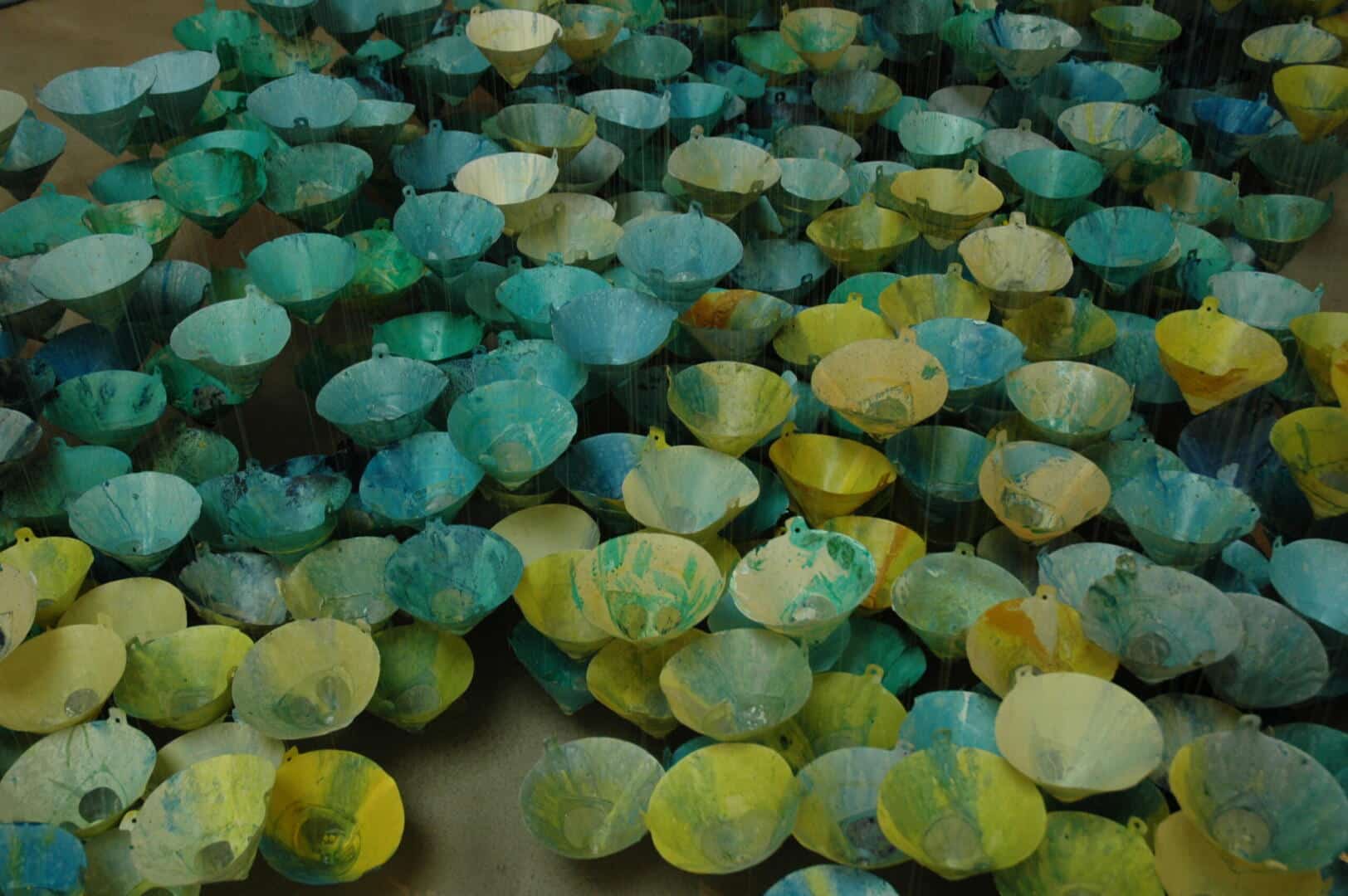 She set up separate buckets full of pigment based paints, oil paints and linseed oil, and then dipped the cones in each creating “this push and pull of oil and water coming together, creating beautiful surfaces and colors.” The last step involved dipping them n hot beeswax to give them “stability and a certain translucency.” Christel’s cones were beautiful, but that was only half the challenge. Now she had to install her “pool” in a gallery. There wasn’t enough room in her studio for a test run so she had no idea if it would work. She and a group of students went to work suspending 200 yellowish cones from fishing line, which turned out to be an unanticipated bonus. “The fishing line became an important part of the pool because it creates this rain effect – falling lines that guide the viewer down into the color field,” Christel explains. The final piece exceeded all expectations. That was the year 2000. Since then Christel has constructed 14 more pools.

They are all different, specific to the space where they are installed. Christel also used color to create different effects: amber tones for memory, green for water and red with a blood-red center reminiscent of a whirlpool. The idea for Ice Floe came out of a panel discussion at the Fresno Art Museum about art and nature. “We talked about all the issues around global climate disruption,” she says. “And I thought it was time for the ice pool.” 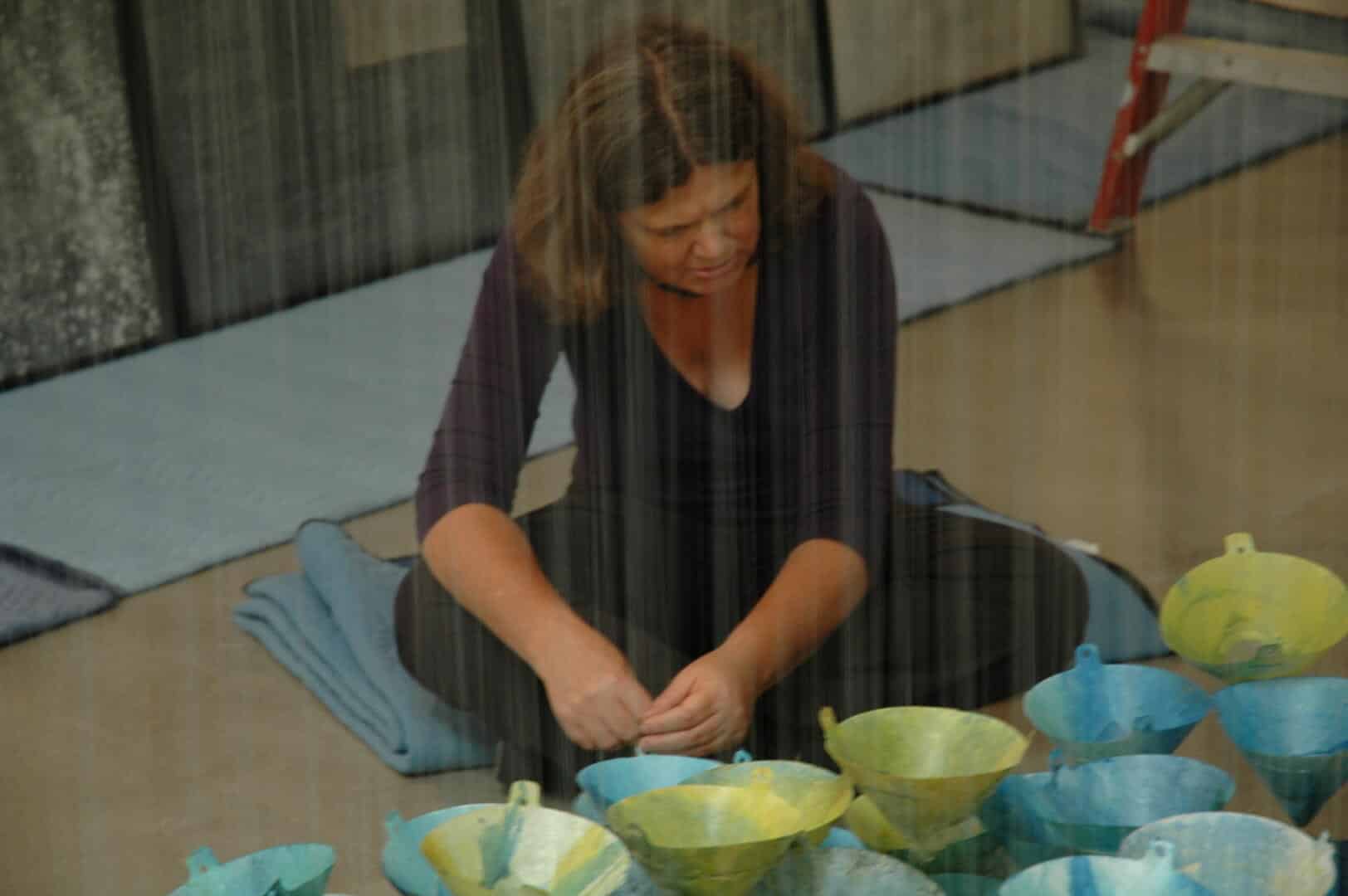 Environmental issues have always been important to Dillbohner. German born, she came to the United States with her husband who was looking to study environmental science at UCLA, and today he works as director of special operations for the Dr. Bronner Magic Soap. It’s a company dedicated to the simple idea that everyone along the supply chain receives fair compensation, and that farming and processing are done in way that minimizes harm to the environment. So-called green issues have been front and center in Christel’s home for more years.

Addressing the issue of global warming seemed a natural step for Dillbohner but every installation brings its own challenges. The first hurdle at Institute for Contemporary Art was the ceiling. “We had a cathedral ceiling, so we came up with idea to create false ceiling, a foot print. Each cone is threaded by assistants (on ladders and scaffolding), knotted to the eyehook in the ceiling and then dropped down. The person on the ground makes the final knot,” she explains.  “And we also adjust for height and position.” It is a tedious process but the results are striking. 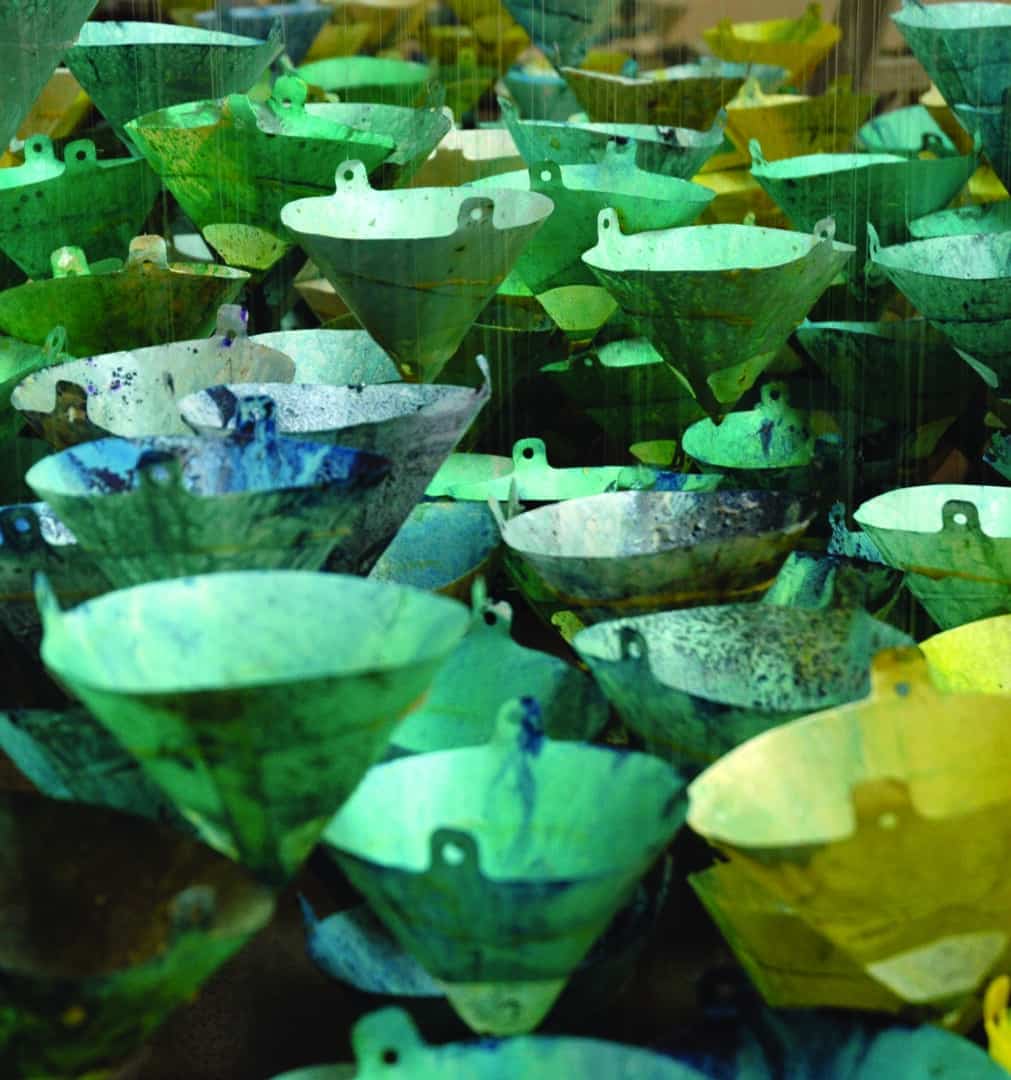 “Each individual cone is part of the palette and when I work with my team we are constantly talking about the flow. It‘s so important to get that movement, even visually. It’s like an abstract painting. You do one brush stroke and the next brush stroke is in response to the one before it. So we continue building up a surface and structure, creating a color field,” she says. “There is always a visual story and I want to bring the viewer in. They may listen to my story but they can also develop their own.”