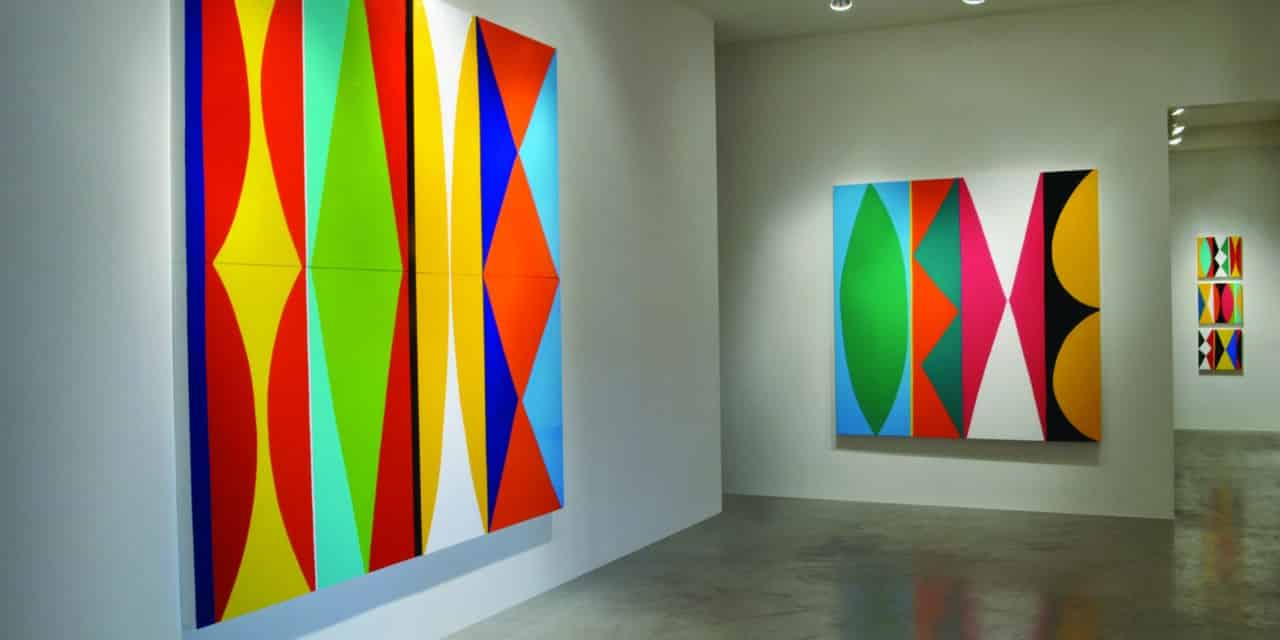 While trash, textiles and tourism may seem trivial to many of us, to Kim MacConnel they have inspired almost four decades worth of art. That work now decks the walls and the floors of the Museum of Contemporary Art San Diego in its La Jolla location.

MacConnel gave me an intimate tour of his show Collection Applied Design: A Kim MacConnel Retrospective, his first full-career retrospective in San Diego, which opened recently at the beachfront museum.

We met at noon on a hot November day. Like MacConnel’s signature sense of humor, conditions were dry due to the Santa Ana winds that buffeted us into the museum’s cool lobby. There, MacConnel’s most recent bright and shiny large-scale paintings blasted flat colored shapes from expansive white walls. My privileged mid-week peek, sans tourists and museum visitors, was also an opportunity to have a tête-à-tête with the modest maestro himself, and I knew I was in for a treat. 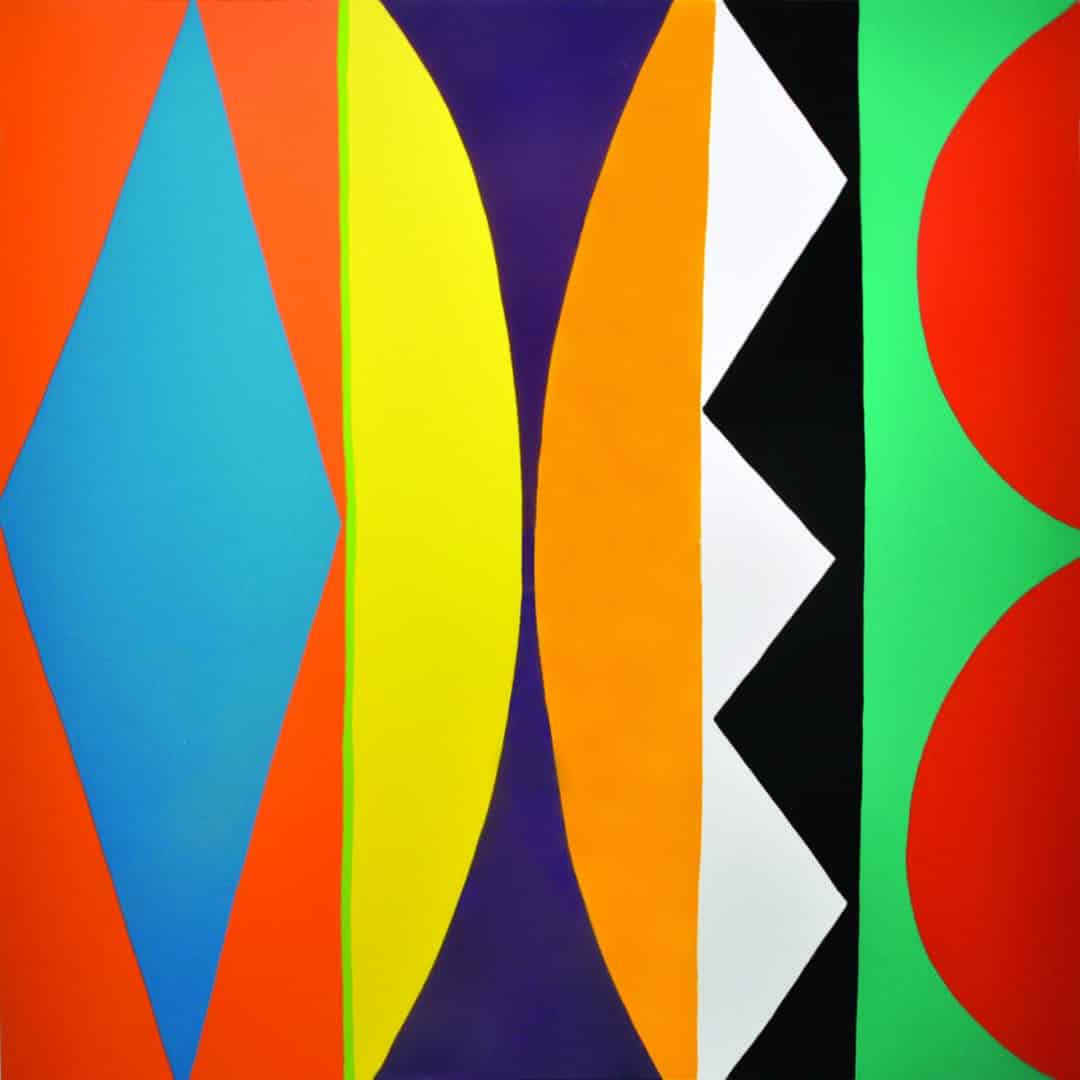 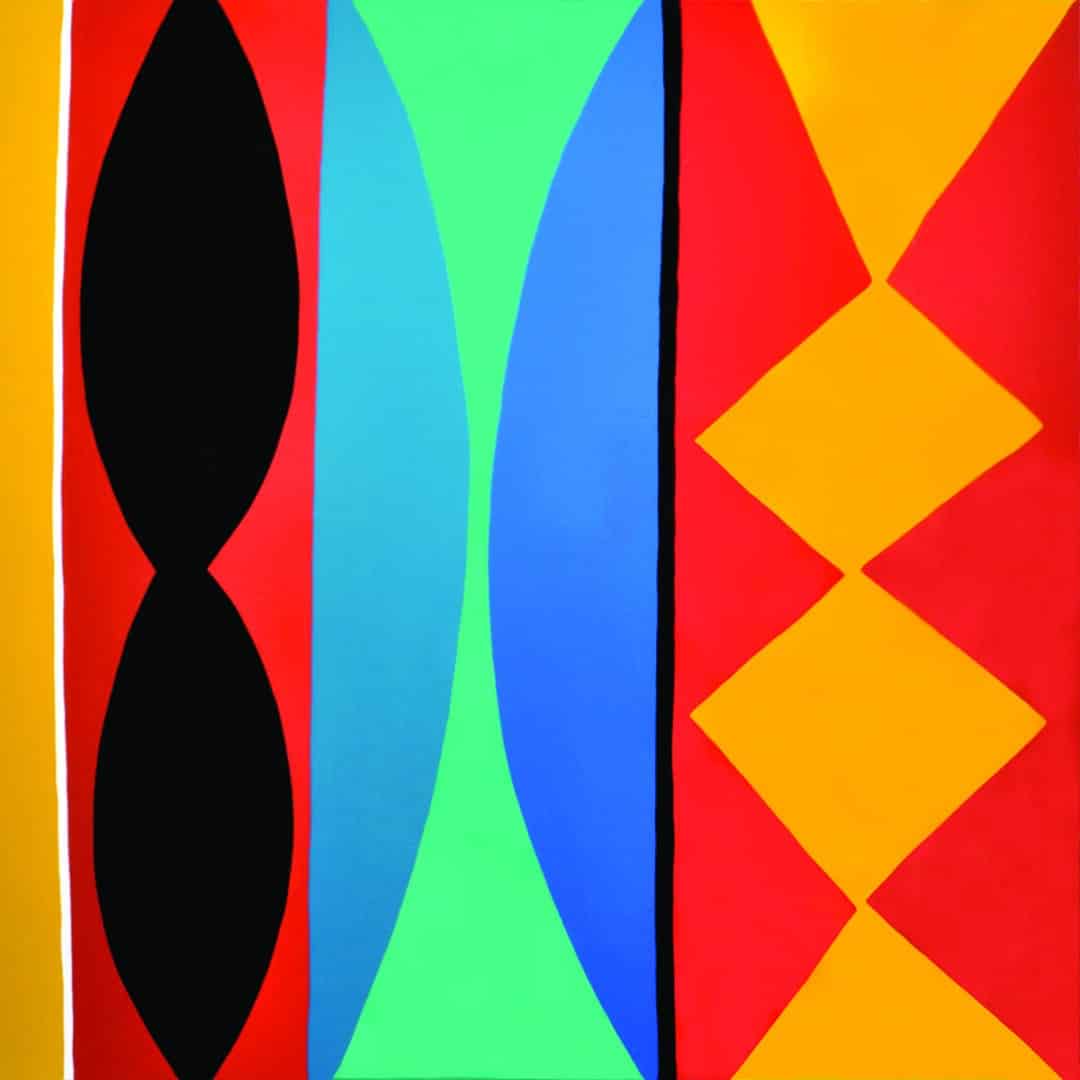 The trim Oklahoma native looked very Southern California in his leather topsiders, blue shorts with matching polo shirt, and a honey tan, no doubt earned while trawling local beaches for carelessly discarded trash. If the saying, “one man’s trash is another man’s treasure,” rings true, then the mild-mannered MacConnel is a wealthy man.

With a running thread of abstraction, MacConnel’s work draws inspiration from a seemingly disparate range of sources including found graphic images, patterned fabrics, Pablo Picasso and Henri Matisse, and the detritus that washes up on our local beaches. His work is informed by travel, an intimate study of indigenous cultures, and a self-conscious examination of the role of the tourist; the show contains multiple samples from each engagement.
The exhibition gathers MacConnel’s work into separate rooms providing a thematic insight into his growth as an artist. “It’s a re-looking at lots of work that falls into lots of different groups of activity. There have been many engagements that I have been interested in,” MacConnel explained. “So the retrospective itself looks a lot like a group show, and that’s kind of a joke.”

His collection of clown sculptures created from beach trash tickle the funny bone. With names like Tipsy, Semifore, Brillo and Big Foot, they sit smugly on their wall sconces crafted from corrugated cardboard painted white, and lead the way like sentinels to an unceremonious pile of beach trash, an installation in the museum’s glass walled sun room that overlooks a pristine beach scene. The irony is not lost on the onlooker.

MacConnel is having fun with his spirited and sometimes wacky art, but there is a serious underlying message. His trash art makes us think of waste and apathy, his tourist snapshots share his commentary on travel and give voice to indigenous cultures. However, there is no angst here, and humor abounds, as do curiosity and serendipity. Case in point is the little clip-art book that led to the show’s title. While browsing stores in New York’s China Town, MacConnel happened upon Collection Applied Design, a reference booklet published in Hong Kong that contained graphic images, which were haphazardly placed with no apparent categorization. “So there might be a dachshund and a bee and a hula dancer on the same page. Light bulbs went off in my head, I thought it was hilarious. How would one use this without an index?” he mused. But the booklet sparked a prolific period for MacConnel as he recreated similar images in a calligraphic style applied by brush, which mimicked the art of Chinese characters, and at least ten years of work emerged from it. 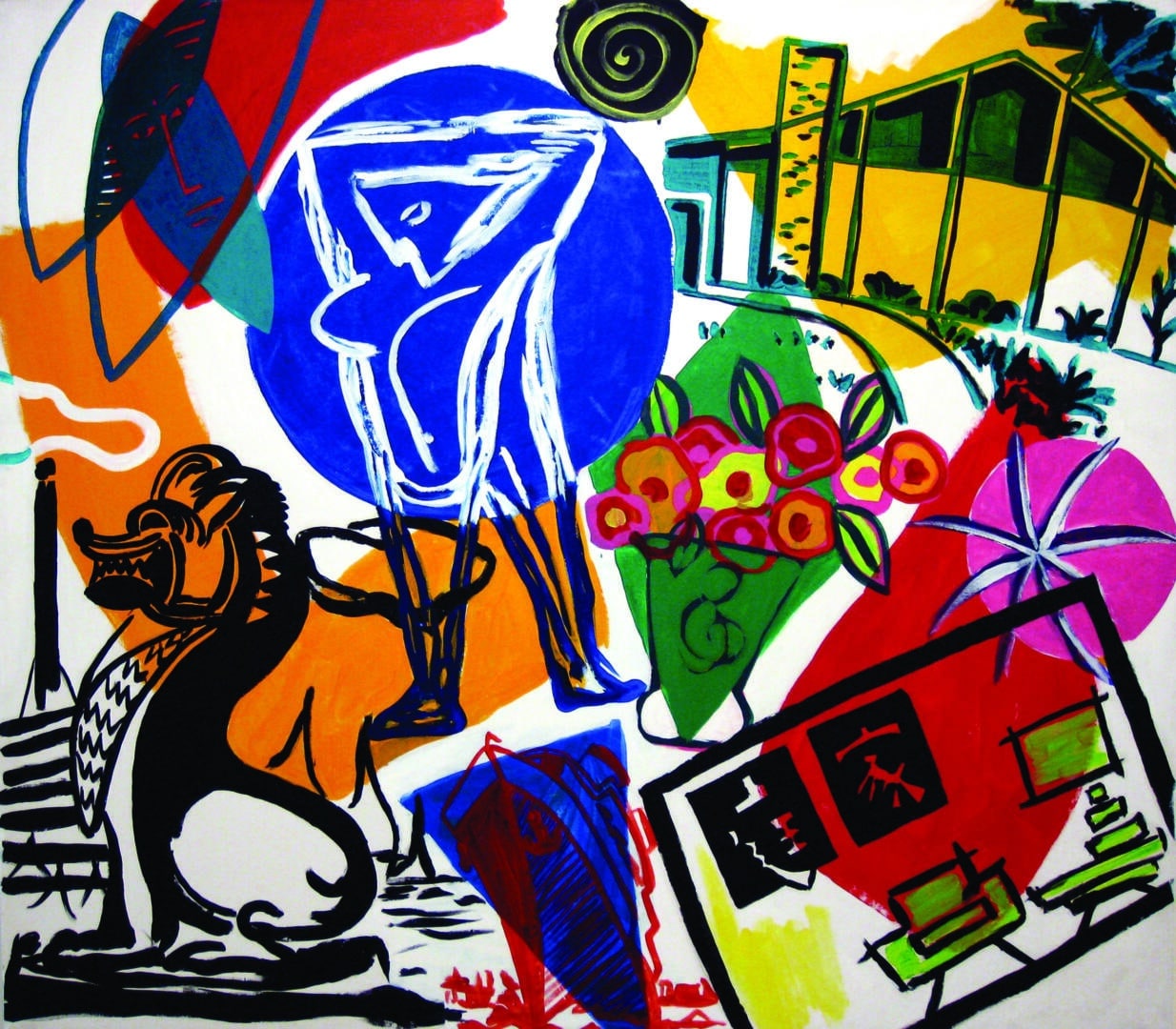 Travel provided a rich source of inspiration, and a massive painted wall installation recreates MacConnel’s tourist-themed work featuring snapshots and postcards. Abstract paintings are placed on top of the painted wall. “This form of abstraction now carries more content than just the painted wall does. This idea is like the underlying structure of the whole show,” he explained.

The installation had been originally exhibited at Aspen Art Museum in 1990. That show was called Decoc Terrae Africano, a phrase that MacConnel found in a book about the travels of Mary Kingsley, a late 19th century explorer. “She went to Africa in 1894, the same year that Picasso was looking at tribal masks. In the book, she uses this phrase, which means ‘from the wellsprings of Africa.’ So that’s what I was trying to reference, how Picasso lifted these images from the fabric of tribal society.”

MacConnel’s own travels to Africa led to a series of work exhibited as his “Africa Wall” installation. The display of his tourist “fetishized” snapshots, montaged inside hand-cut corrugated cardboard frames decorated with mud, straw and dark brown paint, are flanked by two standing lamps, constructed from found objects and reminiscent of Dadaist sculpture. “Everyone needs a fetish lamp,” he joked. This travel abroad allowed MacConnel to pull in voices from distant cultures. “Through the artist there could now be a virtual conversation with someone from India or Africa or Mexico. This cross-cultural interaction definitely affected me.”

As did Picasso. From his 1932 Girl Before Mirror, MacConnel created a series of work titled Woman With Mirror. MacConnel’s versions removed the figure from the piece, bringing the background to the fore. The result is a series of abstract acrylic paintings with vivid colored diamond shapes, zigzags, stripes and dots. Juxtaposed with the art is shabby furniture salvaged from thrift stores then artfully painted and placed on used hand-hooked rugs, stitched together creating large-scale floor coverings in which kitschy puppies, kittens and unicorns frolic among rainbows and toilet seat covers. 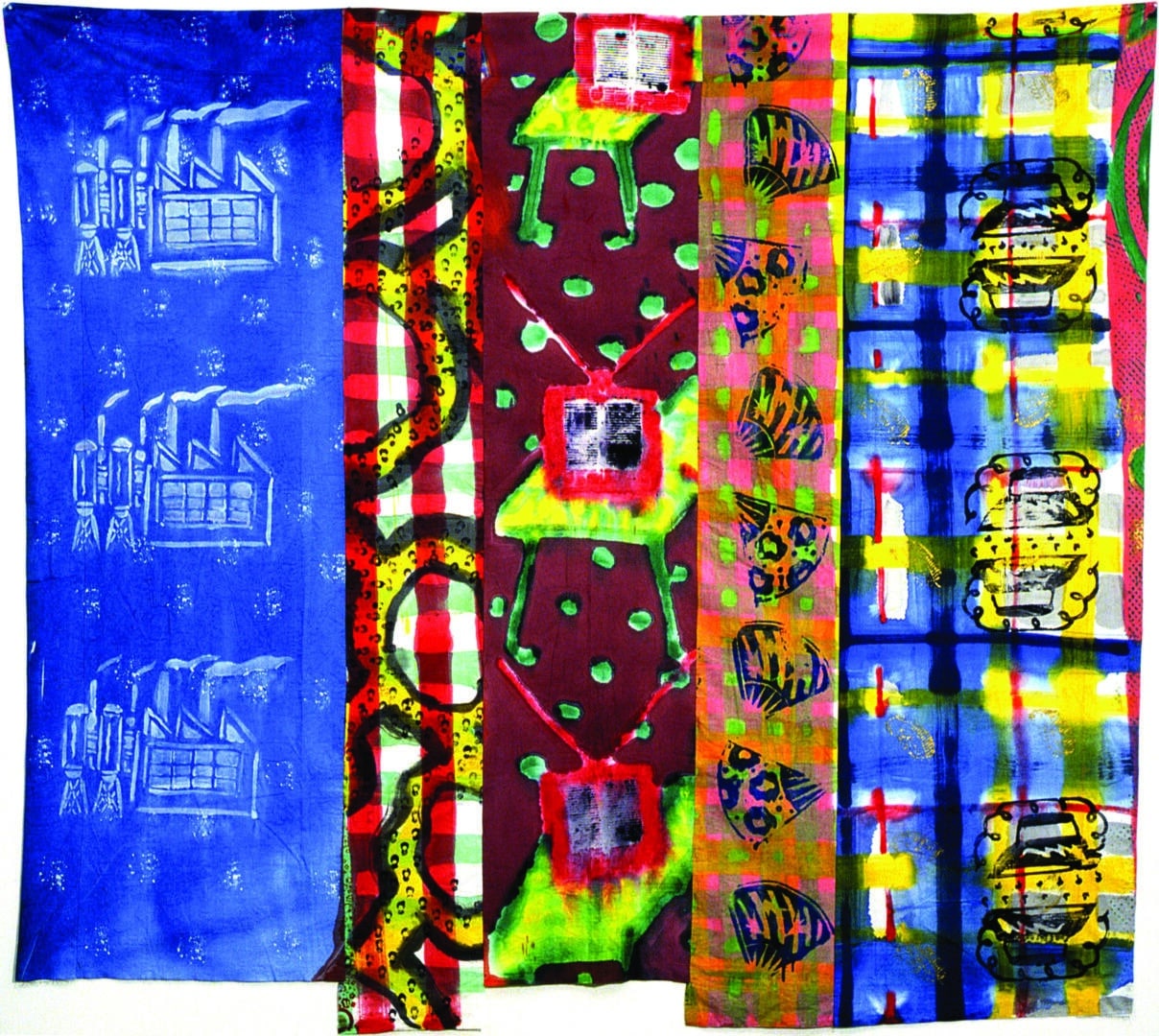 Repurposing everyday objects is a deep-rooted fascination for MacConnel who was born in 1946. Between the ages of eight and twelve he spent several years in Mexico City when his mother divorced and moved him and his sister out of the country. “I wandered around a lot looking at things in the environment. It was the late 1950s when they were excavating for the subway system. As they unearthed objects they catalogued their findings, it was fascinating for me to see these items laid out on tables. This early experience was integral to my aesthetic.”

MacConnel graduated with an art degree from the University of California, San Diego in 1969 then received his MFA form there in 1972. Amy Goldin, a New York critic was his teacher. Bob Kushner was his classmate. “We began this conversation between us about the hierarchy of art making, like craft is at the low end and fine art is at the upper end. Amy was interested in how to apply the terms, which described fine art to craft. Then Bob and I came up with the idea of using near Eastern textiles and that began our journey.” Although the movement, dubbed Pattern and Decoration, is credited to Miriam Shapiro and Robert Zackanitch, they actually joined the conversation several years after the movement was conceived, said MacConnel with no hint of bitterness.
Pages pulled from MacConnel’s college sketchbooks show this early influence. Gestural patterns of Scottish plaids, Japanese fans, French abstractions, Turkish paisleys, Indian florals, Chinese vases and more, playfully painted in vivid gouache, were then recreated in acrylic on large linen bed sheets which were torn and restitched into wall hangings.

When MacConnel first brought this work to New York, in the early 1970’s, reaction was mixed, as the movement was then not widely accepted. “At that time there was an emphasis on the conceptual and the minimalist movements, and galleries were not interested in color, and they weren’t particularly interested in painting,” said MacConnel. People said that he would never get a show because his work was not serious. His work was considered too bright for the post Vietnam War era. But the criticism did little to dull down MacConnel’s aesthetic, and New York’s Holly Soloman embraced his work, launching MacConnel on the road to acclaim, and over the past three decades he has compiled an impressive exhibition record. 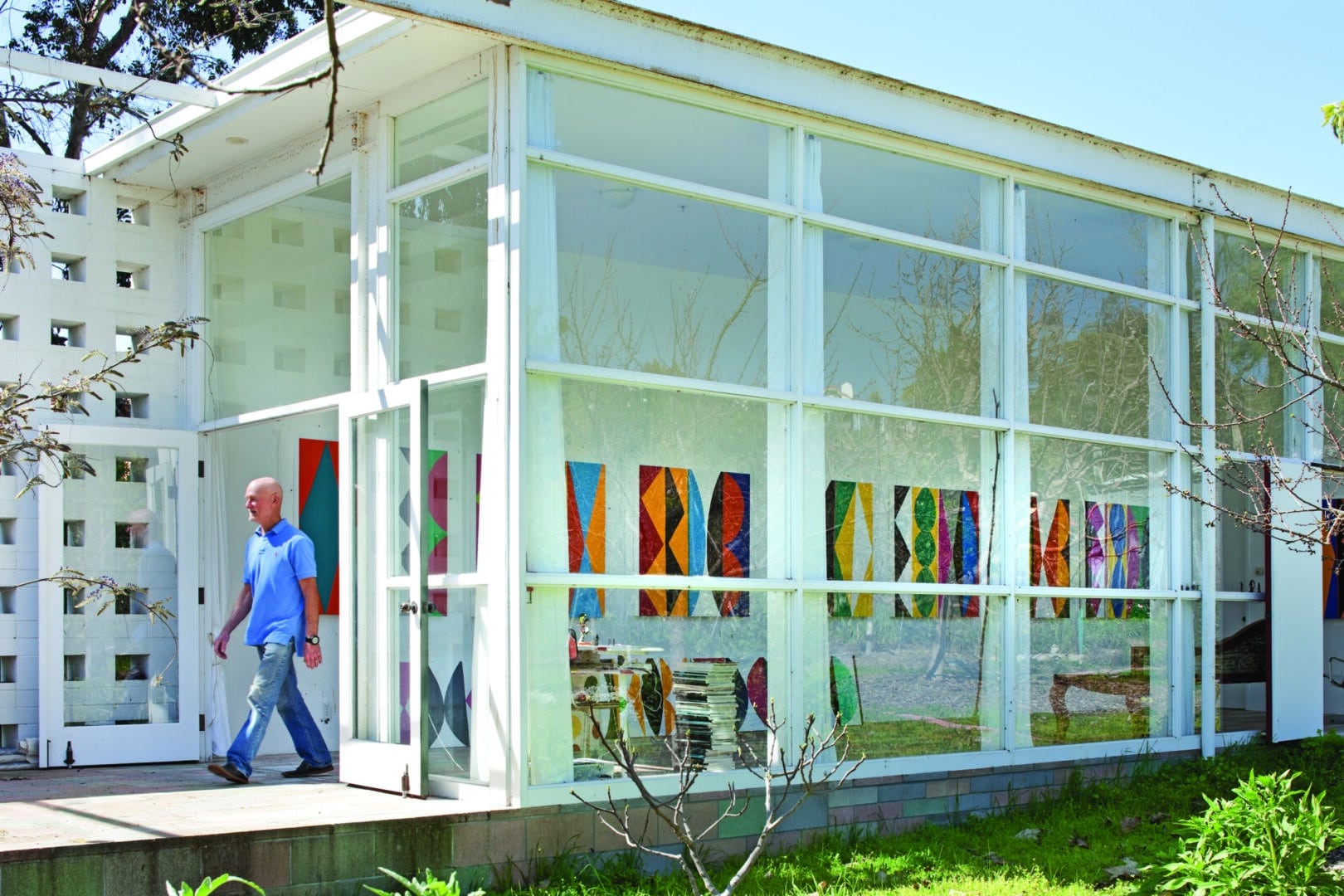 He was picked for the Whitney Biennial five times and has been in museum exhibitions internationally. MCASD hosted MacConnel’s first major exhibition in 1976, the first version of Collection Applied Design and has since featured his work in both solo and group exhibitions. Recently retired as a professor of art from UCSD, MacConnel continues global travel with his wife, Jean Lowe—an acclaimed artist in her own right—and he continues to work prolifically.

In a witty irony, the subtlety humored MacConnel seems to be having the last laugh. From the controversial birth of the P&D movement that thumbed its nose at the establishment and unabashedly flaunted color and pattern proclaiming trivial decoration on a par with high fine art, to his current major retrospective 37 years later, MacConnel has risen to celebrity artist. But he would never show it. As we exited the museum, I shook MacConnel’s hand and thanked him for the private tour and as the images of Brillo and Big Foot still danced in my head I asked him, “How did you get your break that made all this great stuff happen?” And he replied, “I just got lucky.” Luck and a fistful of talent.