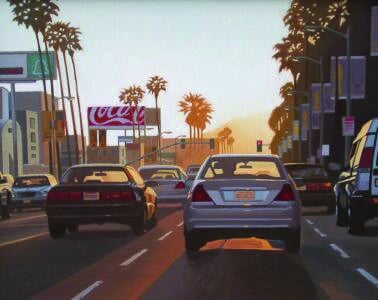 She displays the simple details of everyday life like wayne thiebaud and easily depicts city scenes like a modern edward hopper.

Ann Duffy is comfortable on the road. It’s a somewhat surprising fact, considering her pulse still speeds up every time she hops on the Vespa she rides around Seattle. Her nerves are still recovering from an embarrassing incident that left her entangled with the scooter at the bottom of a hill. And she has yet to paint one of her cityscape scenes standing in the middle of a six-lane highway (what’s so scary about that?). Nevertheless, Duffy enjoys the thrill of travel. Her exuberance to see the world and capture it on canvas is what’s so universally appealing in her art.

Everyone can relate to Duffy’s realistic scenes. She displays the simple details of everyday life like Wayne Thiebaud (of whom she’s a big fan) and easily depicts city scenes like a modern Edward Hopper. But unlike Hopper, people are rarely present in Duffy’s paintings. Still, the pieces don’t evoke a sense of loneliness, as the viewer easily steps into the familiar surroundings Duffy has created for them. 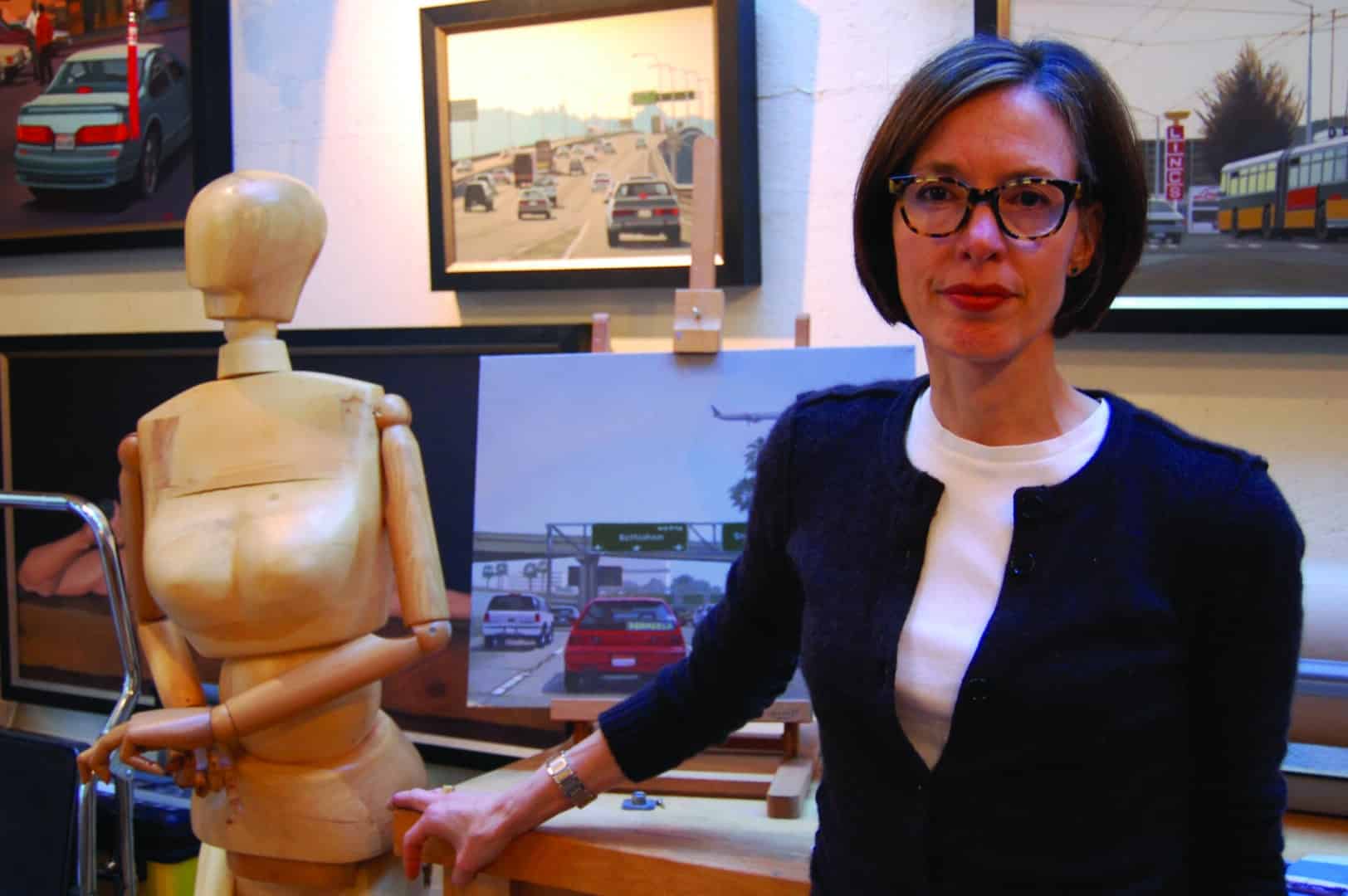 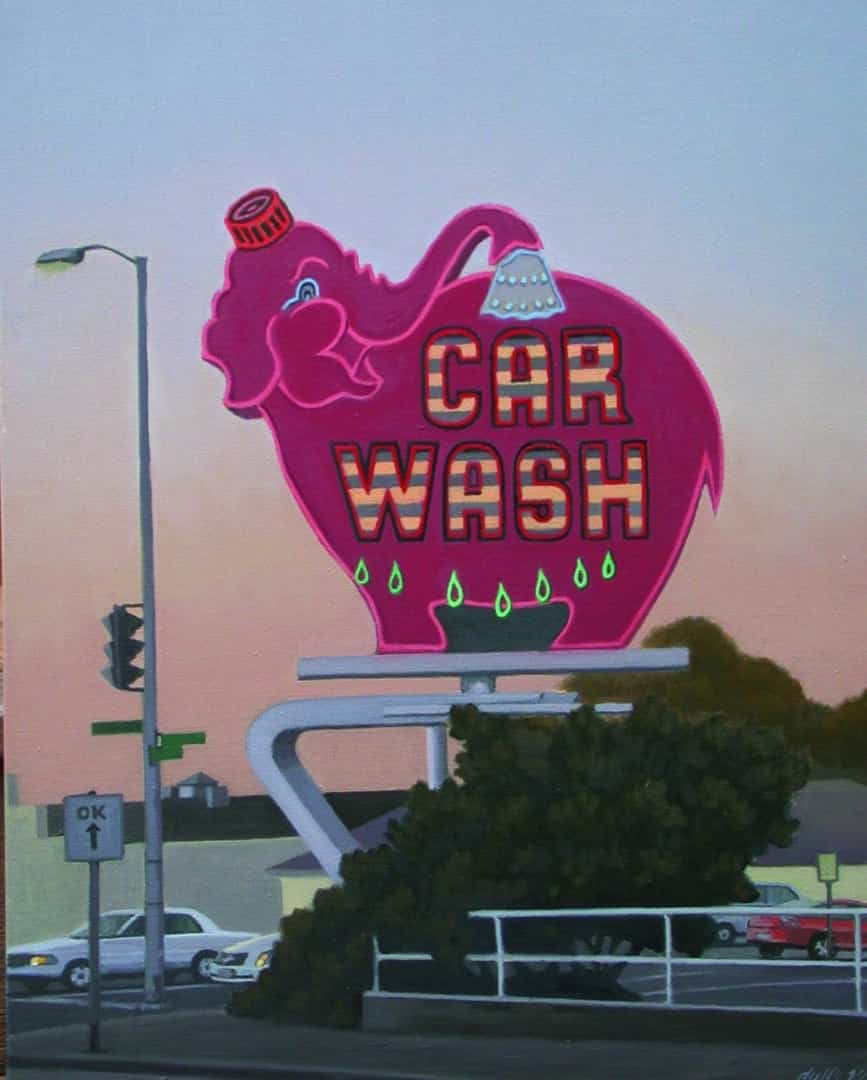 Duffy’s awareness of light makes it simple to slip into these snapshots of society. She uses color in such a way that it conveys not only the time of day, but how that time of day feels. “It’s the light that attracts me to something unattractive. An ordinary cityscape can be really beautiful when the light’s right.” She says sunset and sunrise are her favorite times to paint—when the sun has the ability to transform buildings from gray to gold and a landscape from dismal to delightful.

What once might have seemed ordinary is deemed extraordinary in Duffy’s work. A simple street sign, less-than-luxury car, pink Elephant car wash, or rundown building can shine, even when it shares space with iconic landmarks like the Space Needle, Mount Rainier, or Sunset Boulevard. However banal or mundane these subjects might appear, Duffy is highlighting the icons of our everyday lives. “We pretend our own backyards are our life, but we spend so much time in our cars or walking down the street,” Duffy says. “In the Impressionist day they painted streetscapes and it’s really the same thing, only our streets are so different.”

Many roads have led Duffy to her current career as a painter. But it was a trip around the world in 1992 that she credits as the turning point. Over a period of six months, she and her husband visited many masterpiece-filled museums, rode camels in Cairo, bathed in Istanbul, and saw snake charmers on the streets of New Delhi. “We just saw so many beautiful, fascinating things that made me want to go and create something myself,” she says. 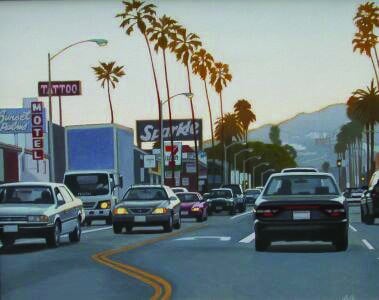 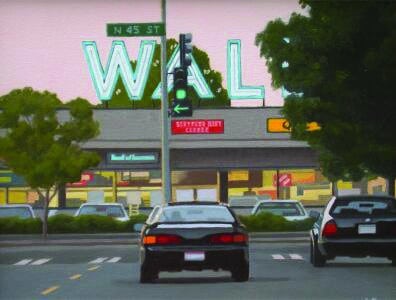 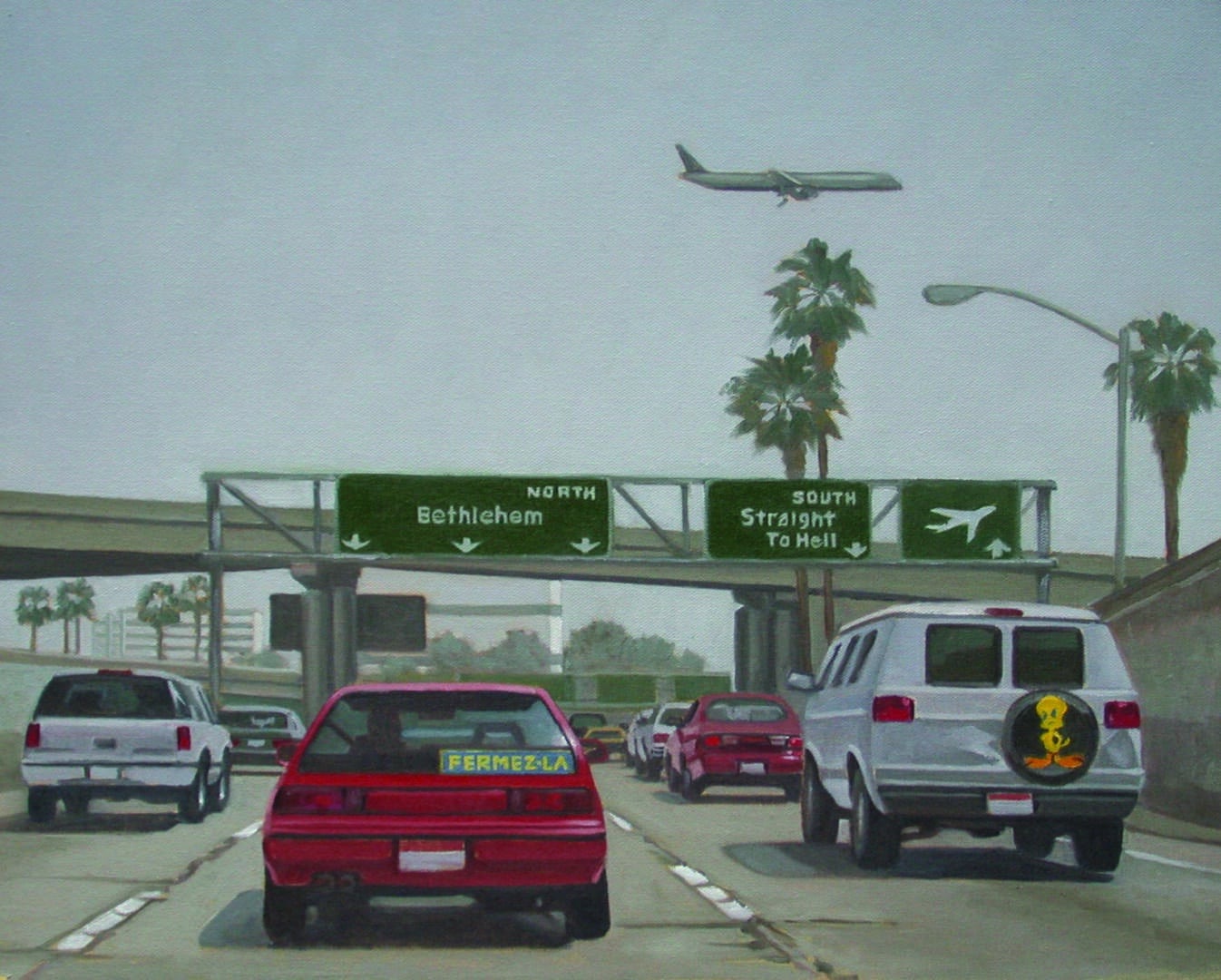 So she returned to her Seattle home with a renewed passion to pick up the paintbrush. This wasn’t the first time Duffy dabbled in artistic endeavors; she attended the Art Institute of Boston in 1977, following graduation from high school in Cape Cod. But she didn’t always want to be an artist and admits attending art school was more a decision to follow in her older sister’s footsteps than one of personal drive. Without much motivation, and too much pot (“It was the 70’s,” she says, without much more explanation needed), she dropped out and proceeded to plunge into a period of “aimlessness and travel.”

If Duffy was ever devoid of direction, it hasn’t mattered much—her aimless adventures always seem to lead her on the perfect path. A spontaneous excursion in 1982 is what landed her where she is today, almost by accident. She and a friend took the Trans-Canadian Rail on a four-day journey from Montreal to Vancouver, then headed down to Seattle to visit her friend’s brother. But after spending all she had on the train ticket, she arrived in the Emerald City flat-out broke. Without any funds to get back to the East Coast, she stayed in Seattle, got a job, and hasn’t left since. “I had no grand plan. I just ended up here, and it worked out,” she says.

That’s the way things seem to go for Duffy. Incidents and inconveniences ultimately don’t hold her back from her goals. While away on one of her jaunts in New Orleans, Duffy happened to pick up a paper at the hotel and read about a four-alarm fire at her art studio, housed in a historic building in Seattle’s Pioneer Square. What may have been disastrous could now be called serendipitous. Most of Duffy’s work was in a show at the time, and dozens of prized art books were saved from water damage by a bookcase. The fire also forced her to find a new place to work, but she hadn’t particularly liked the studio space, anyway. A could-be catastrophe instigated the change that was meant to be. She ended up in a small, light-filled studio in her very own backyard, where she’s spent countless hours over the past decade.

These days, if she’s not in her studio, she’s jetting off to Paris, New York, or Los Angeles or taking classes at the University of Washington towards a Bachelor’s degree in French (a passion she decided to pursue after falling in love with the language in France). She’s committed to being a lifelong learner, embracing new experiences and enjoying all her sojourn has to offer.

Duffy’s joy for life bubbles out of her in her inescapable smile that’s captivatingly contagious. But that doesn’t mean outside influences don’t impact her work. She’s so attuned to what’s going on in the world around her, that it’s impossible to not let it creep onto the canvas. “When you’re sitting in the studio painting for hours, thinking about life, you just feel like tweaking things,” she says. That’s how witty or critical comments on society will come about, like freeway signs directing people “straight to hell” or a billboard advertising how to get in touch with Jesus in case of the Rapture. This reproachful rhetoric was especially apparent in her art during the Bush administration. “I was definitely disturbed for those eight years,” she says, bothered by the ideology that uses religion to support war. “I just felt like there was religion in the air all the time; it seemed like something you could find on the street corner.” 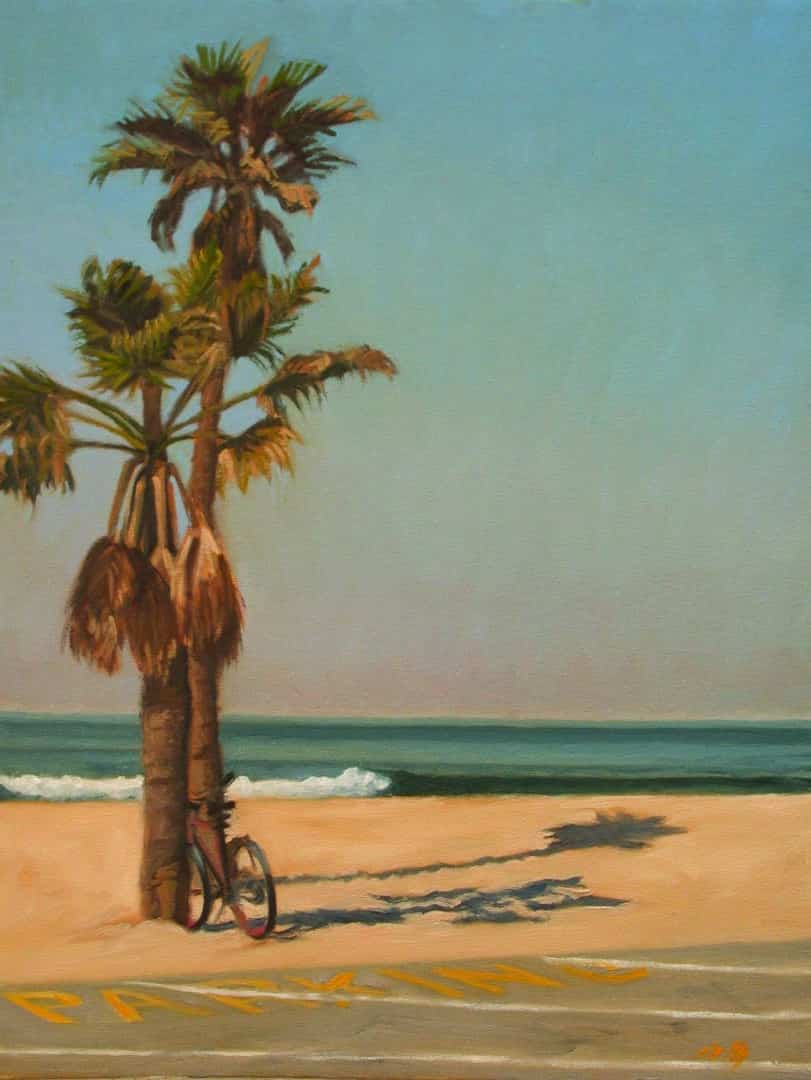 But even when Duffy includes these fictional messages within realistic settings, she admits they are more for herself than the viewer. Her intention is not to bombard others with her worldview, but to share a view of the world. She thinks art can be for everyone; she doesn’t even attempt to understand “artspeak” so wouldn’t expect her viewers to decode any hidden meanings in her work. “I just want people to feel okay about liking something and not feel like they have to know something to like it.”

Ann Duffy spends her days on the road, so others can come along for the ride. She brings light into dark spaces, joy into seemingly insignificant scenes, and color into fields of gray. Her work has the ability to melt away stress, simultaneously leaving you breathless. It’s like strolling out to a sublime sunset after a hectic day at work. Time stands still and nostalgia seeps in. You’re left standing there with the freedom to feel whatever the scene summons within you. “I think my art just speaks for itself; I don’t think I have to say anything.” Amen.